Land-cover change during the 20th century

Historical cadastral map (Häradskartan in Swedish) from the beginning of the 20th century over a 1652 km² area in southeastern Sweden was digitised in order to compare with present-day land cover data. The historical map focus on arable fields and meadows, dwellings and to some extent grazed areas. However much of the forest at this point was grazed grassland with few scattered trees. The outland (forest) was used for collecting fire wood, charcoal burning and grazing. We found that semi-natural grassland cover decreased by over 96% in the area, being largely lost to afforestation and silviculture. Present-day deciduous forest and wetlands are primiarily situated on former grassland. These land cover changes have huge effects on plant species richness associated to managed semi-natural grasslands as the latter becomes smaller and more isolated. 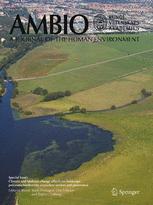 General information is available in Swedish.