Weather observations have been made continuously at the old astronomical observatory in Stockholm since 1754. This is one of the world's longest records of meteorological observations, and probably the very longest continuous record from one and the same local site. Thus, the Stockholm observation series provides invaluable information about weather and climate change for more than 260 years.

In the 18th century, the weather observations were made by astronomers as a part of their studies of the universe. Today, the observation site in Stockholm is a weather station within the national station network managed by the Swedish Meteorological and Hydrological Institute (SMHI).

This data collection contains observations of air temperature, air pressure and cloud amount together with calculated daily and monthly averages of air temperature since 1756. Observed maximum snow depth each winter since 1904/05 is also included.

All temperatures shown in the graph represent conditions approximately valid for Stockholm as in the middle of the 19th century. Artificial effects on the temperature data, from the growing city and due to insufficient protection from radiation of old thermometers, have been removed.

In the eighteenth century, during the Enlightenment, it was common that astronomers carried out weather observations as the science topic today known as meteorology was not yet born. In Sweden, the earliest instrumental weather observations were made in Uppsala in 1722. Anders Celsius (1701–1744), now most famous for his thermometer scale presented in 1742, was involved in making these first measurements already when he was a young student at the university and he continued with making weather observations in Uppsala for many years. Thanks to Celsius’ work, temperatures in Sweden have been measured in the Celsius scale already since the 1740s.

In 1735 another young person, Pehr Wilhelm Wargentin (1717–1783), registered as a student at the university in Uppsala to study mathematics and astronomy. Wargentin assisted Celsius in the making of both weather and astronomical observations. In 1746 Wargentin presented a thesis based on his studies of planet Jupiter’s moons.

After Wargentin had been elected as the secretary of the Royal Swedish Academy of Sciences in 1749, he became engaged in planning for the construction of an astronomical observatory in Stockholm. The building was inaugurated in 1753. Wargentin became the director and immediately moved into apartments in the middle storey, where he lived for the rest of his life. 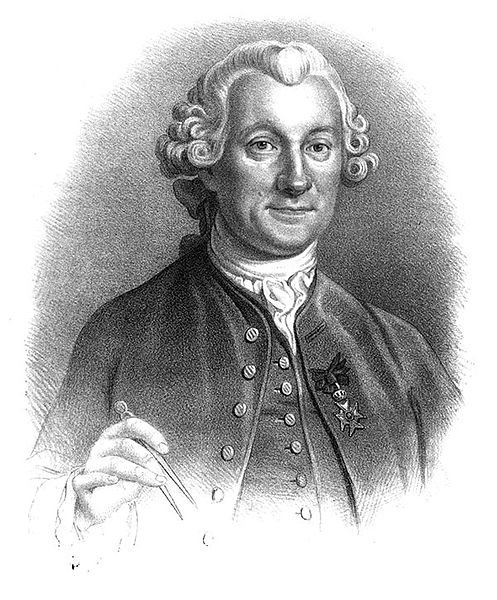 Astronomer. Secretary of the Royal Swedish Academy of Sciences. The first director of the astronomical observatory in Stockholm. He initiated the long weather observations series there. Image from Wikimedia. Public Domain. Sweden’s first air balloon ascent was made at the Stockholm observatory in September 1784, in presence of King Gustav III.

Pehr Wilhelm Wargentin lived on the second (middle) floor. His thermometer was probably placed outside the window seen to the left, about 5.8 m above ground on the wall facing north (towards the artist). His barometer was probably placed in the building extension on the ground floor, directed towards east. The original document is available at the Centre for History of Science. Image from Instagram. Photo courtesy of J. Häggblom.

The duties of the academy’s secretary were plentiful, ranging from being the responsible editor of the academy’s transactions to finding financial support for buying and manufacturing instruments at the observatory and to laying out plans for various scientific investigations. Wargentin discussed with his colleagues about the best way of conducting weather observations and he argued for the introduction of standardized routines. On January 1, 1754, Wargentin started to keep a diary of weather observations made at the astronomical observatory in Stockholm and he continued to make these observations himself almost every day until he died on December 13, 1783.

Wargentin’s scientific work as a climatologist

Wargentin wrote seven articles with topics related to meteorological instruments, weather and climate, which were published in the academy’s transactions between 1749 and 1778. This set of articles provides a good view of how well, or little, scientists of those days understood climate and weather phenomena. In the first of these papers he discussed different thermometer types that were in common use at the time. He judged the Swedish type, made by Celsius and other colleagues, to be the most reliable. This probably explains why the Celsius type rapidly became the standard in Sweden.

In the last of the seven articles, Wargentin analysed his own temperature observations made in Stockholm during 1758–1777 together with observations in Uppsala from 1739–1757. He was able to demonstrate that a common belief of those days that climate repeated itself every nineteenth year was a false idea. Hence, he demonstrated the efficiency of scientific methods for testing a hypothesis. He also stressed the importance of undertaking more observations to help scientists to better understand nature’s rules. Already from the beginning, temperature was measured in degree Celsius. The height of the mercury column at the barometer was measured in Swedish inches (29.69 mm) and wind speed was reported in a scale from 0 to 4. The original document is available at the Centre for History of Science. Unknown photographer. Further remarks on the Swedish climate, concerning heat and cold

Front page of Wargentin’s article in the transactions of the Royal Swedish Academy of Sciences, 1778, vol. 39, p. 3–19. The original document is available at the Centre for History of Science.

From Wargentin to SMHI

After Wargentin had died, another astronomer, Henric Nicander (1744–1815), took over the role as the academy’s secretary and also the task of doing weather observations. Later, observing the weather became regarded as a simple routine work and the job was left to other staff such as attendants and caretakers. Scientists at the academy became more engaged in planning for the establishment of a national network of weather observing stations.

Largely as a result of the academy’s efforts, the first successful Swedish national network of weather stations on land, with about 25 stations, was established in 1859. About a decade earlier, another network with weather observations being made at about 15 lighthouse stations had been established by marine authorities. Together, they were the start of the modern network of several hundred weather stations managed by the Swedish Meteorological and Hydrological Institute (SMHI).

The old astronomical observatory in Stockholm is one of the stations in the SMHI network and measurements there have always been made at the same geographical location. The World Meteorological Organization (WMO) acknowledged in 2017 this site as a long-term observing station, implying that it is considered as highly important for climate science due to its long-term sustainable observational standards and high-quality time series data. Stockholm has the longest record among all the WMO long-term stations.

Much, however, has happened during the more than 260 years that have passed. Not just has climate changed and become warmer, but also observation routines, instruments and their exact positions have changed (since 1961 at 59°20'30.1"N, 18°03'17.6"E, 44 m a.s.l.). The local environment has also changed as Stockholm has grown from being a rather small city having a few hundred thousand citizens to a large urban area with more than a million people. This has led to a local warming since the middle of the 19th century due to the so-called urban heat island effect. Thus, it is a challenge for scientists to use the hundreds of thousands of individual observations to obtain so-called homogeneous data series; i.e. data that only show how weather and climate has varied.

Scientists at Stockholm University have studied how to derive homogeneous daily air temperature and air pressure data for Stockholm back to 1756. This work started with a doctoral thesis in Physical Geography (Moberg, 1996) and continued in projects done together with scientists in other European countries having similar long-term daily instrumental weather records and with colleagues at Uppsala University and the SMHI (Moberg et al., 2002; Moberg et al., 2003). The dataset presented here is based on the outcome from that work and has been updated to the present by merging with recent data from the SMHI resource Öppna Data.

Data re-organized into one collection with the different data types being separated into individual datasets and with data updated as follows:

Observation times — Information about the time points when weather observations were made each day (morning, noon, evening), as used for calculation of daily mean temperatures, during 1756⁠⁠ – 2018.

Same data structure as in version 1, but with data updated to 2017.